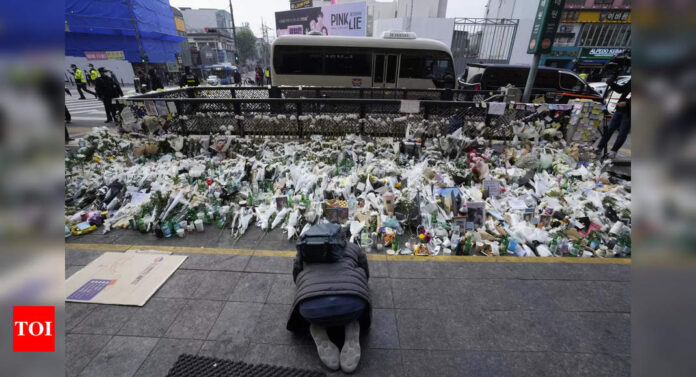 SEOUL (Reuters) – South Korea’s police chief said on Tuesday officers had received multiple urgent reports of danger ahead of a deadly crowd at a Halloween event, but his handling of them was “insufficient”.
At least 156 people, mostly young people, were killed and dozens more injured in a surge of deadly crowds Saturday night at the first post-pandemic Halloween party in Seoul’s popular Itaewon nightlife district.
An estimated 100,000 people flocked to the area, but because this was not an “official” event with a designated organizer, neither police nor local authorities actively managed the crowd.
“There were multiple reports to the police indicating the severity of the scene just before the accident occurred,” said National Police Chief Yoon Hee-keun.
Police were aware that “a large crowd had gathered even before the accident occurred, urgently indicating the danger”, he said, acknowledging that the way this information was handled had been “insufficient”.
South Korea is typically strong on crowd control, with protest rallies often so closely guarded that officers can outnumber participants.
But in the case of Itaewon’s Halloween festivities, there was no designated event organizer, and people flocked to the area to attend events organized by individual bars, clubs, and restaurants.
Police said they had sent 137 officers to Itaewon for Halloween, but 6,500 officers were present at a citywide protest that was attended by only about 25,000 people, according to local reports.
president of south korea Yoon Suk-yeol He said on Tuesday that the country urgently needed to improve its system for managing large crowds after the disaster.
“The safety of people is important, whether or not there is an organizer for the event,” he told a cabinet meeting.
He called for the country to develop “cutting-edge digital capabilities” to improve crowd management, but critics say such tools already exist and were not implemented in Itaewon.
Seoul City Hall has a real-time crowd monitoring system that uses mobile phone data to predict crowd size, but it was not used on Saturday night, local media reported.
Itaewon district authorities also did not deploy security patrols, and officials said the Halloween event was deemed “a phenomenon” rather than “a festival,” which would have required an official plan for crowd control.
In the evening, tens of thousands of people packed a narrow alley, with eyewitnesses describing how, with no police or crowd control in sight, confused partygoers pushed and shoved, crushing those trapped in the alley.
Analysts say this was easily avoidable, even with only a small number of police officers.
“Good, safe crowd management is not about proportion, but about crowd strategy: for safe crowd capacity, flow and density,” said G. Keith Still, professor of crowd science at the University of Suffolk.
South Korean expert Lee Young-ju said that if local police knew they would be short staffed, they might have sought help from local authorities or even residents or shop owners.
“It’s not just the numbers,” Lee, a professor in the Department of Fire and Disasters at the university of seoulhe told AFP.
“The question is how they managed with the limited number (of police officers) and what kind of measures did they take to compensate for it?”