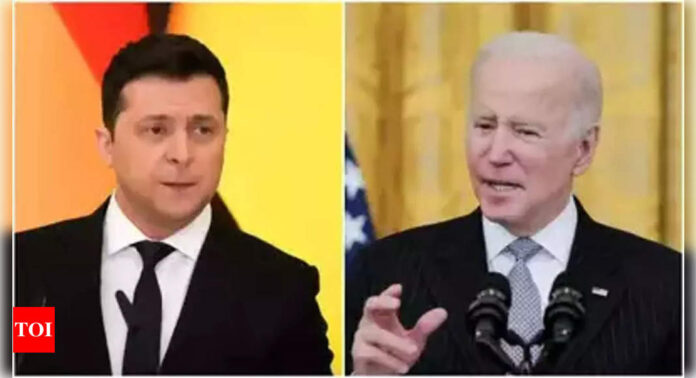 WASHINGTON: US President Joe Biden lost his temper during a phone conversation with his Ukrainian counterpart Volodymyr Zelenskiy in June when he called for more military help, NBC News reported Monday, citing sources familiar with the call.
The report says that Biden routinely calls Zelenskyy when the United States announces new aid packages for Ukraine.
But the June call was different.
Biden had barely finished briefing Zelenskyy that he had approved another $1 billion in military assistance for Ukraine when his counterpart began asking for additional aid that Kyiv needs but is not receiving, according to the report.
Biden raised his voice, saying, according to the NBC report, that Zelenskyy could “show a little more gratitude.”
Prior to the June 15 phone call, Biden’s dissatisfaction with Zelenskyy had been building for weeks, the sources said. According to them, the US president and several of his aides believed that Washington was doing everything possible and as quickly as possible, but Zelenskyy continued to publicly pay attention only to what was not being done.
After Zelenskyy was rebuffed during the June call, Zelenskyy publicly delivered a video message thanking Biden for the help and defusing tensions.
“I had an important conversation with US President Biden today,” NBC quoted Ukraine’s president as saying on video. “I am grateful for this support. It is especially important for our defense in Donbass.”
The United States has been a leading provider of security assistance to Ukraine, particularly since the start of the Russia-Ukraine conflict on February 24.
This report on the Biden-Zelenskyy phone call comes two days after Washington announced $275 million in additional military assistance to Ukraine.
“This reduction will bring total US military assistance to Ukraine to an unprecedented level of more than $18.5 billion since the beginning of the Administration,” the US State Department said in a statement.
The United States, in 2022, provided more advanced defense equipment to Ukraine, as well as a greater amount of previously provided equipment, according to a report by the Congressional Research Service.
According to the Pentagon, US security assistance committed to Ukraine includes high-mobility artillery rocket systems, Stinger anti-aircraft systems, Javelin anti-armor systems and Mi-17 helicopters.
Ukrainian officials have sought to acquire other advanced systems, including fighter jets, anti-ships, and additional air and missile defense capabilities.