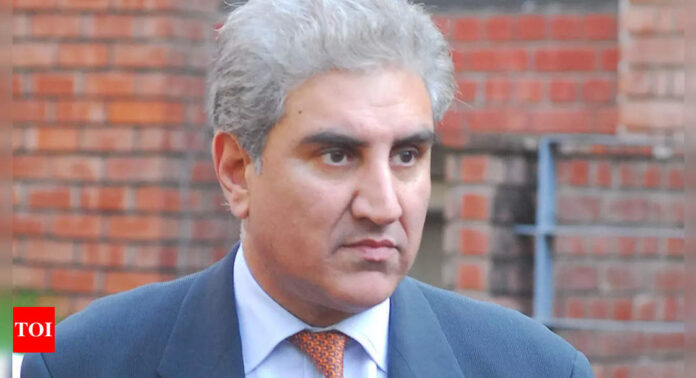 LAHORE: Former Pakistani Foreign Minister Shah Mahmood Qureshi has said he will lead the march to Islamabad until Pakistan Tehreek-e-Insaf (PTI) party chief Imran Khan fully recovers from injuries sustained during an assassination attempt.
Khan, who suffered gunshot wounds to his right leg on Thursday, said Sunday that his party will resume Tuesday’s march to Islamabad from the same place where he survived an assassination attempt.
He has been released from the hospital on Sunday after undergoing successful surgery. He now he has been transferred to a private residence in Lahore.
Qureshi told a large public gathering at Clock Tower Chowk in Faisalabad on Sunday that Khan had asked him to lead the march in his place. He said that even if he is not fully recovered, Khan will take part in the long march in Rawalpindi, the Dawn newspaper reported.
He said that the people of Faisalabad and the whole country demand that Prime Minister Shehbaz Sharif and Federal Home Minister Rana Sanaullah Khan resign as they are the real planners of the attack on Khan in Wazirabad.
Khan suffered gunshot wounds to his right leg when two gunmen fired a volley of bullets at him and others traveling in a container truck in the Wazirabad area where he was leading the march.
The 70-year-old former prime minister and PTI party chairman, who underwent surgery for gunshot wounds on Thursday, was on his way to a news conference from Shaukat Khanum Hospital, owned by his charity.
“We have decided that our march will resume on Tuesday from the same (point) in Wazirabad where I and 11 others were shot, and where Moazzam was killed,” Khan said before being released from hospital. He later he came to his residence from Zaman Park here.