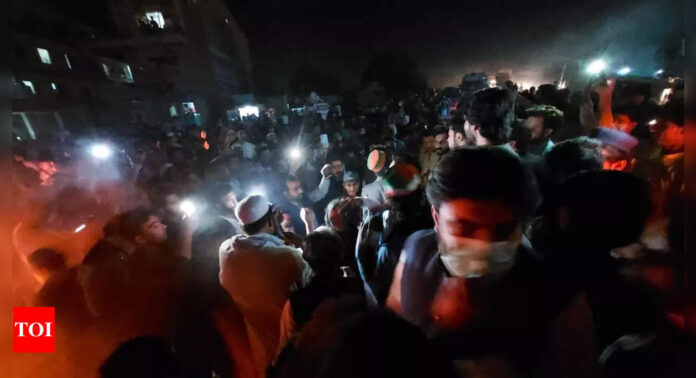 GURJANWALA: Pakistan Tehreek-e-Insaf (PTI) Secretary General Assad Umar said Thursday that party chairman Imran Khan suspects three people: Prime Minister Shehbaz Sharif, Inside Minister Rana Sanaullah and a senior military officer were behind the assassination attempt on him, according to a media report.
“Iran Khan He has said that he had the information beforehand that these people might be involved in the assassination attempt against him,” Umar said in a video statement alongside Mian Aslam Iqbal party leader, Geo News reported.
Umar, citing the PTI president, demanded that the three people be removed from their positions, according to the report.
The PTI leader added that Khan warned that if these officials are not removed from their positions, the party will hold nationwide protests as Pakistan can no longer function in this way.
“If the demands are not met, all party workers are waiting for Khan’s call, and when he does, there will be protests all over the country,” Umar said.
Sharif, meanwhile, condemned the Gujranwala shooting incident and ordered Home Minister Rana Sanaullah to seek an immediate report from the Inspector General of Police and Chief Secretary of Punjab.
Protests erupted in several cities across the country after Khan and other PTI leaders were injured in a gun attack during the PTI’s long march in Gujranwala.
Khan and other PTI leaders were injured after a man opened fire near the PTI reception camp at Allahwala Chowk during the party’s long march, ARY News reported.
Following the gun attack, protests broke out in different cities across the country against the assassination attempt on Khan, according to the report.
PTI workers started demonstrations in 17 locations in Karachi against the armed attack. Raucous party workers blocked roads at Power House Chowrangi in north Karachi, while a large number of PTI supporters staged a protest on Korangi Road.