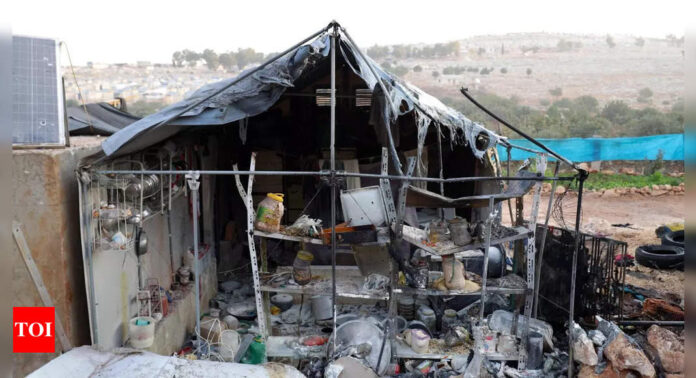 IDLIB: Syrian government forces shelled a tented settlement housing families displaced by the country’s conflict in the rebel-held northwest early Sunday, killing at least six people and wounding more than a dozen, opposition war monitors said. The bombing is the latest violation of a truce reached between Russia and Turkey in March 2020 that ended a Russian-backed government offensive in idlib province that is the last major rebel stronghold in Syria.
The truce has been repeatedly violated in the last two years killing and injuring dozens of people.
The tented settlement, known as the Maram camp, is just northwest of the provincial capital of Idlib.
based in Great Britain Syrian Observatory for Human RightsAn opposition war monitor reported that government forces fired around 30 rockets towards rebel-held areas, including the Maram camp on Sunday morning, killing six and wounding 15. He said that among the dead were two children and a woman.
Other opposition activists also reported that six people were killed and more than 30 wounded.
The pro-government Fake FM The radio station said Syrian government forces shelled positions of the Al Qaeda-linked Hayat Tahrir al-Sham group, the most powerful militant group in Idlib. He said Syrian and Russian warplanes also attacked the areas.
Syria’s conflict erupted in March 2011 and has since killed hundreds of thousands of people, displaced half of the country’s pre-war population of 23 million and left much of Syria destroyed.